In classic Greek theater, violence happens offstage. If someone's going to kill himself, he tells you so then exits. If the hero and the bad guy engage in a duel to the death, they'll thrust and parry "stage right and exeunt." Only one will return. It's partly good taste, the belief that audiences shouldn't have to see such things. I suspect the other part is more practical: a good death scene is difficult to stage--and what do you do with the corpse afterward?

Shakespeare takes the easy way many times, too. People come in carrying dead bodies, like Lear bearing poor Cordelia; or parts of them, as Macduff does with Macbeth's head. Easy to make a fake head, not so easy to make it appear the head of a living actor is being separated from his body.

Today we have all kinds of tricks to make on-stage deaths look real. If you've seen the Three Musketeers decapitate the evil Milady just as the theater goes dark, or the trick of light in Les Miserables that makes it seem Javert is falling to his death, you know how effective those moments can be. Don't get me started on blood and gore in movies. Just don't.

In books, written descriptions of death have become more and more lurid, especially in mysteries, and I for one don't like it. Call me soft, but I don't want to read details of how a terrified victim is killed by inches by a crazed antagonist. Since I don't like to read that stuff, I don't write it. 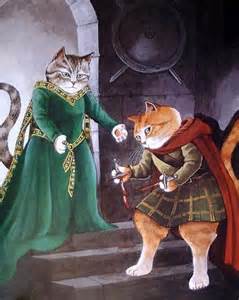 I just re-read my most murder-filled novel, Shakespeare's Blood. Victims in the book are killed in ways that mimic deaths in Shakespeare's plays, so they're not pretty. What I did to dial back the horror is keep the violence mostly off the page. Bodies are found, and readers learn what happened to them, but you don't have to be there and watch it happen. That creates suspense and concern for the protagonist, an American tourist in Britain who's being chased by a madman. We know what awaits Mercedes if he catches up with her, but we don't have to dwell on how we know it.

I re-read the book last week, because another author contacted me to say that April 23rd is the 500th anniversary of Shakespeare's death. Her book concerns the Bard too, and she wondered if we should do some shared promotion. I agreed, so we'll see what we can put together.

Either way, I like my way of presenting murder. It's never nice to kill someone, but it's a tiny bit nicer if the readers don't know all the gory details.
at January 04, 2016