An Argument for Better Arguing 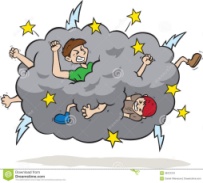 "But can't you see how wrong you are?"

Centuries ago, when I was in high school, I took up argumentation. I joined the debate team because my sister had done well there, and because the coach cornered me in the hallway and asked me to.

I loved it. Research, constructing cases, looking for weaknesses in the arguments of others, and organizing information so I could get at it easily. It might not sound like everyone's cup of tea, but it was certainly mine. I ended up ranked in the state and got a scholarship to college.

Debating in college was even more fun. The competition was tough, but we traveled to places I'd only read about and formed a close-knit group that loved to--you guessed it--argue. Play with language. One-up each other. Argue some more.

Debate is formal argument, and it doesn't bear much resemblance to the real-life version. One can try tossing out lies and false evidence, but the other team is likely to call her on it. [Great example: we once debated a team that based their whole case on a plan developed by the U.S. army. As they laid out their points, it sounded really good. However, my partner recognized the reference and went digging through her evidence cards. She was able to report from a later article that the army had abandoned the plan because it was flawed and unworkable. That pretty much ended that debate!]

In a formal debating situation, everyone is similarly armed with intelligence and background research. Results are decided by a judge who knows the subject, so there's little hope he or she will be fooled by tricks or displays of "personality." [Although we did have a judge once in college who gave us the win because he said it was pretty even as far as speaker points but we were dressed better.] In real life, people look for easy answers, don't do independent research, and stick with their beliefs even when the rest of the world thinks they're crazy to do so. To err is human, and we all do it.

Debaters often have to take both sides of an argument, which taught me that there is no "right" answer in most cases. Arguments can be made for just about anything, and tough subjects come down to emotional reactions we must all be aware of. Wise people look past their emotions and try to find truth. Not so wise people blame "them" for trouble and convince themselves that things would be better if we could just get rid of all those pesky _____ (Answers will vary).

One of the first things a debater learns is that she must listen to what the opponent says. Once she understands his arguments, she must apply logic and evidence to see where the weaknesses lie. You're going to build a wall. How will that get done? You're going to send everyone to college for free. Where will the money come from? You're going to overturn Citizens United. By what process? NOTE: Please don't write to explain those answers to me. I know what the candidates have said. I'm simply appalled by voters who think that when a person is President, he or she can just wave a wand and everything that was promised will happen. Um, Congress? Remember? Our legislative branch?

Listening and reasoning is a far cry from the screaming we see on TV and on social media. People talk past each other, belittling those who disagree with their views. Do we really think we can change anyone's mind by telling them they're stupid? Can we sway undecided voters by demeaning each other? Does anyone think the media isn't encouraging bad behavior and ridiculous statements? In most cases, their goal is to get people to watch/listen, not to create an informed electorate.

One of the most important things about competition debate was that we never engaged in personal attacks. Worse than useless (and very bad form); it was actually counterproductive. How much better would it be if we asked why a person supports a particular candidate and then talked calmly with him about it? He probably won't convince you to change your mind, but in the process of explaining his choice (if you don't get angry or uppity but just keep asking questions), he might be forced to admit there are weaknesses in his candidate's platform. Of course, he's likely to be prepared with his own ammunition, and you'll have to defend your choice, too. You'll have to admit to weaknesses on your side, because that's the way real life goes.

I'm heartily sick of politics, as is every thinking person I know. We need the process, I suppose, and we will go on as a nation no matter what happens, but I sure wish the American public would take some lessons from formal debate.
at May 23, 2016