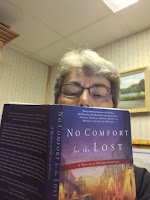 The big summer holiday is over in our little town, so we go back to doing what we do. In my case that's reading and writing. The writing was in the final phases for several pieces over the last few months and the promotion that's ongoing when a book is newly released. First it was the last Dead Detective mystery, then the fourth Sleuth Sisters (by Maggie Pill, but I'm heavily involved). After that it was finalizing the audio books for MACBETH'S NIECE (after years and years it will finally be on Audible) and the second Dead Detective mystery, DEAD FOR THE MONEY. I had to listen to them to be sure they're correct, which takes hours and hours but made me pretty happy. JoBe Cerny reads Seamus very well, and both he and the narrator for MN, Caitlin O'Connor, are great readers, especially when it comes to presenting characters with different accents, which makes their readings interesting and easy to listen to.

While I was doing all that, I was still reading--I'm always reading. Last week I had four books going that were all very good. First was WILDE LAKE by Laura Lippmann. I expect great things from her, and she never disappoints. I also read a good historical, NO COMFORT FOR THE LOST, by Nancy Herriman, a woman I met at this year's Printers' Row in Chicago. Steve Hamilton's acclaimed new book, THE SECOND LIFE OF NICK MASON, is a good read, though more to John's tastes than mine. The protag didn't engage sympathy or empathy in me, so it was in the "good story" category but failed to engage much concern for Nick's future. I'm about to finish DANGEROUS PASSAGE by Lisa Harris, which is a good police procedural if a little heavy on "Will God send a man to love me?" angst. I recently started Bruce Holsinger's A BURNABLE BOOK, which isn't for those not really into medieval detail. It took me a while to get into the story, but Geoffrey Chaucer is in there, so I stuck with it, and it's becoming clearer what's going on now.