What Do Authors Do For Fun? 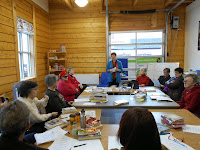 If you know someone who writes, you might have noticed her idea of fun is different from that of other people. An invitation to go shopping might be answered with, "I have a chapter that just won't work out right, so I think I'll stay home and work on it."
Conversations all turn into analyses of publishing.
And don't think about asking what she's working on if you don't have half an hour to listen to the Next Great Idea.
Two things authors enjoy are talking about books with other readers and talking about books with other writers. I did both those things recently, so I count it as a great week.
First, I visited Petrolia, Ontario, where a lively group of readers listened to my spiel on mysteries, offering their own suggestions as we went. The library is in an old train station, and the town itself is charming. I highly recommend visiting, and I have promised to return (in summer, of course. Everything is better in summer!)
The Petrolia visit was made even nicer by the fact that my sister lives on the way, so we had a "girls' day out." Anyone who knows her can attest that she knows books, too, so she was a hit with the group.
Then it was on to Traverse City, where I spent the weekend with a dozen authors who came together to...remain separate. It's a writers' retreat we've had for the last few years, and the purpose is to get away from ringing phones, household chores, and family demands and simply write for hours on end. Of course there is some socializing, as you see in this photo, but we try not to spend too much time at it. For lunch we visited the grounds of the old State Hospital, now a cool tourist spot, and talked about how one might poison someone and get away with it (in a novel, of course). The place is a must see if you're in TC, although it still has associations for me of the time we were taken there in high school by our sociology teacher. I haven't yet figured out what we were supposed to learn from the visit, but I was left with a feeling of sadness for those poor, imprisoned souls that still haunts me 46 years later. 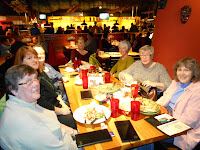 Anyway, except for mealtimes, we wrote for hours, right up until checkout time on Sunday. I got a great start on the fourth and final Dead Detective story, and others in the group all reported good progress on their various projects.
So when you get to know a writer, you're likely to learn that what they consider fun is a little odd. Traveling 200+ miles to talk about books? Yup. Spending a weekend shut up in a hotel room while the rest of the world plays outside? Yup. That's just how we are.