I Am Not Just Sitting on My Hands

Sunday Update: The promo is finished. 80,000+ people downloaded the book, and there was a big jump in sales for the audio book as well.

Friday Update: Down to #3 in Free Books on Amazon but #1 for Women Sleuths. I'll take it!

Thursday Update: THE SLEUTH SISTERS is now #1 in Amazon's Cozy Mystery List. Imagine me dancing around the kitchen!

Wednesday Update: THE SLEUTH SISTERS is currently #1 on Amazon's list of FREE books. The FREE days last until Saturday, so if you haven't downloaded it yet, now's your chance.


Most people know by now that Maggie Pill is also me. She writes cozy sleuth mysteries, and her first, THE SLEUTH SISTERS, will be FREE for Kindle from Tuesday, November 25 to Saturday, November 29, 2014. Here are a few tidbits: 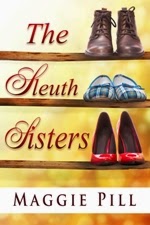 Set in northern Lower Michigan
Concerns sisters who start a detective agency for widely different reasons
Deals with sisterly issues in a funny way
Involves some tromping around in the U.P. (while getting shot at)
Has a sequel coming out on Dec. 5th called 3 SLEUTHS, 2 DOGS, 1 MURDER. (To be honest, it's available now. Release dates don't mean  what they used to!)

For those of you who wonder why Maggie Pill: She's a new persona for a different sub-genre, and her name honors my grandmother, Margaret Ruth Pillsbury. (She would get SUCH a kick of of all this!) A cozy series isn't much like the Losers mysteries or the Dead Detectives or the Simon & Elizabeth historicals. Maybe I should have 5 different names, but it's a lot of work just keeping up 2!


For those who wonder why I'm not working on the other series: I am. It's the publishers who are slow. I finally got a date for the next Simon & Elizabeth mystery, HER MAJESTY'S MISCHIEF: July 8, 2015. It seems very far away, but I haven't even got a release date yet for the next Dead Detective, DEAD FOR THE SHOW. The wheels of publishing grind slowly!