I could give a long and not very interesting explanation of why I have an overload of print books in my office, but I won't bore you with that.

Let's get to the sale: I'm offering some of my older books at discounted prices. If you're interested in them for yourself or for gifts, this is a great time to get them. No booksellers between you and me, although I do have to charge an extra $5.00 for postage if you want them mailed to you. If you live in northern Lower Michigan, we can arrange to meet somewhere and save you a few bucks.

You can find out more about the books here or on Amazon (where they know everything!) 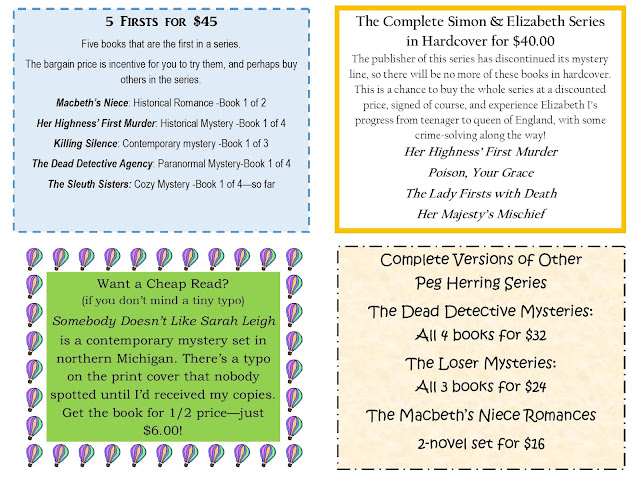 Okay, it's not THAT old. I wrote Shakespeare's Blood back in...maybe 2005. It's a tad bloodier than my other books, but that's not my fault, it's the Bard's. Shakespeare's got lots of death and dying in his plays, and the bad guy in my book is a copycat.
The Kindle version is on sale this week for .99 on Amazon.
I recently modernized the book, since the technological changes in the last ten years are pretty extensive. I still like it, and during the edit I got excited about the sequel, which has been languishing in my computer for years.
You see, when an agent takes on a book, he or she will often tell the author to get busy on the sequel. For writing a first book, an author has a lifetime. For the rest, she gets a year if she's lucky, and fans are grumbling the whole time about how long it's taking. So while I waited for SB to sell to a publisher, I worked on another adventure for Mercedes Maxwell, this one related to Charles Dickens. (Can't help it. English lit is in my DNA.)
Shakespeare's Blood didn't sell nationally, the way the agency thought it would. They dropped me, and I moved on to what was selling, my Simon & Elizabeth historicals, the Dead Detective Mysteries, and the Loser Mysteries. But now I've finished those, so what's next? I like Mercedes, so it might be her turn.

The reason I looked at SB again is that an author with a similar book (NINE DAYS TO EVIL) asked if I'd like to co-promote for the 400th anniversary of the Bard's death. When I agree, she found two other books (PLAN X and MACDEATH) with the same theme, so we have a foursome. I've read all the books and enjoyed how each author weaves Shakespeare's work into a modern mystery.

So here's the premise of Shakespeare's Blood: an American tourist is plunged into danger when she finds an old book that might be related to Shakespeare's brother. The fact that he was on the trail of Spanish gold just makes the danger all that more real. Mercedes thinks she doesn't have anyone she can trust as the killer zeroes in on her. She might be right about that, but of course, we can all be wrong sometimes.
And the sequel to SB? It's going to take some time and a trip to Toronto, but I'll keep you informed.