The Terrors of Publication

Today I sent a newsletter to over two thousand readers, telling them about the book that will release on December 4, DECEIVING ELVERA. I also bought an ad on Facebook, letting readers there know how to pre-order the book. 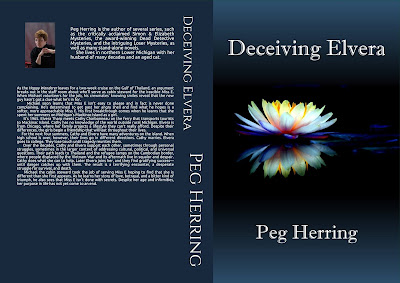 Terror. I'm gripped with terror, I tell you!

Why? Because it's a little like navigating a minefield, this publishing thing.

*The print cover looks great on Amazon, but it's wonky on Draft 2 Digital (see spine above), and I haven't yet figured out why.

*I have a FINAL final review copy on the way, so I might find a few leftover errors that will now have to be fixed on several sites before December 4th arrives (actually it's earlier than that, because they need time to get the files changed. More like November 30, then.)

*Over the past week, I've slated ads with a half-dozen sites like Great Books, Great Deals and Kindle Daily Nation, so their readers will see the cover and read a bit about the book. Each one is different, and I dread that I might have made some mistake that will screw things up.

*And, of course, there's the everyday author angst: Will they like it?

Into this madness my husband wades, asking the right questions.

So what if some people don't like the book? It's not the end of the world, or even the end of my career.

Most mistakes can be corrected, so we'll take them one at a time (He means I will, but I get it.)

And the cover thing probably just needs me to step away for a while and think about it. I get a little stressed with uploading stuff like that if it needs adjustment. Breathe, Peg, breathe!

So I will get through this, and I LOVE the new book. It's been a two-year project, and I've read it at least a zillion times, but it's been worth it.

So take a look at Deceiving Elvera--not a mystery, so don't expect a murder on page two. Think Kristin Hannah, not Janet Evanovitch.

What Are You Working on Now? 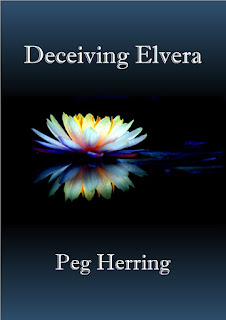 Many writers will agree that the Corona virus has been horrible but also helpful. Afraid to go out, unable to do what we once did, what can we do besides write? Since the virus hit big-time, I've published two books (one as Maggie Pill, one as myself) and worked on one that's been a couple of years in the works and is now with the copy editor for its final corrections. Hoping that will come out before the end of the year,  I teased you with the cover above.

The downside to Corona for me is mental. With that and other national concerns, I've had trouble concentrating for any length of time, which means my work gets done in fits and starts. When I stop each day, I feel like the work is disjointed, but when I go back the next day and start reading, it's not. It's one of those, "it's not you, it's me" things. I'm writing the same as usual, but stress makes me feel like things aren't right.

And what am I writing? A book called THE CUTEST LITTLE KILLER. It begins when a private investigator is visited by two children who want their guardian dead. They're offering a very large sum of money to someone who'll take care of that for them.

Don't you love that? I do, but now comes the work. I know of authors who say they write a story once and that's it. I can't believe that's possible, but I won't call anyone a liar. I'll just say that for me, it takes many times through a MS to see what's needed and add it in. I start with a "backbone," the story itself, a plot that keeps the reader interested, holds together, and completes the story arc. Once that's done (on a rudimentary level), I know the characters better, so I go back and build them into the story with depth and background. In this story, readers are supposed to like the kids despite some oddities they exhibit, plus I have to make it acceptable for the reader to root for the success of aspiring killers.

Once I have the backbone and have fleshed out both plot and character, I go through a few more times, adding setting detail, figurative language, little jokes, red herrings, and minor characters. All those things should shine by the time the story is ready, but they aren't apparent to me until I have the main story taken care of. This is when I listen to the computer read my words aloud. It's also where I give a copy to my first reader (for whom I feel sorry, because she never gets to read the final, pretty version). At this stage I'm looking for plot holes, repetition, spots where the wording could be better, or a place for a minor additions that will make the whole thing more intriguing. When I'm done, the work is complete, with a stable structure and attractive additions.

Now it's ready for the editors to pick at, after which I'll read again and change what needs to be changed.

You'll probably read my book once. I've read it around fifty times.