My grandmother died on my birthday in 1968. We couldn't wish her back, since she'd been in a lot of pain for a long time. Later, I helped Mom clean out her house, and we came upon her sewing basket. For some reason I asked if I could have it, and my mother said yes.
I still have it. I think of her every time I take it out of its cupboard, though I can't think of a single time I saw Grandma sewing. It's hers, and that's enough.
My other grandmother was the type who asked her progeny what they wanted of her things long before she died. One day when I was visiting I told her about my new hobby, refinishing old furniture. Pointing to a table that had always sat in her living room, she explained that as a young woman she too had taken up that task. The classic-style table was cherry wood, she told me, and she had rescued it from somewhere and given it new life with elbow grease and varnish. "Maybe you'll want it when I'm gone," she said, and I readily agreed, though it was weird to consider that time. I've had it for forty years, and though I've downsized a few times, I can't let that particular piece go.
Keepsakes mean something to us, though they might mean nothing to others. When I die, I have no doubt someone will toss the battered basket of needles and thread in my sewing cabinet. The table will be sold or donated. No one will know how those items brought back memories each time I saw them, memories of Grandma P. or Grandma Mac, who taught me so much and loved me in such different ways. 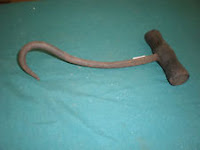 I have mementos of my grandfathers, too: a collection of miniature bottles one of them had as a boy, and for the other, oddly enough, a hay hook I found in a shed on the property. I immediately pictured it in his hand as he wrestled bales into place like the expert he was. I kept it, for him and for myself.
Things don't really mean much to me, but some things attach to memories, and memories mean a lot.