November 12, 2018
I reported recently on the reversion of the Simon & Elizabeth Mysteries, my historical series, to my own again. When you sign with a publisher, they get the rights to a book or series for X number of years. They're professionally edited, and the publisher builds an audience that can speak for their quality. Downside: the cost is high due to people other than the author needing to make a profit. When I got Simon's stories back, I got new covers and re-published the series at a much lower cost.

Now Loser will get the same treatment.

The Loser Mysteries center on a homeless woman who finds herself involved in solving a murder. From the beginning I knew it would be a 3-book series, since the stories begin with her at her worst and follow her recovery from trauma. The books are beloved by a certain set, and many suggested I might extend it, but once Loser is back to (almost) normal, I felt that further stories would only have presented more murders to solve. There were too few further character revelations to be made.

But the rights are now mine again, so Loser will get re-published at a better cost. I'm required to have new covers, and I'm looking for input. The idea is feet, and we chose pics that represent her three phases: homeless, returning to her roots, and facing her demons.

Here's Book #1 two slightly different ways. Any preference? I was hoping the first (skewed) pic gave a sense of movement, but Hubby says he can't see much difference. 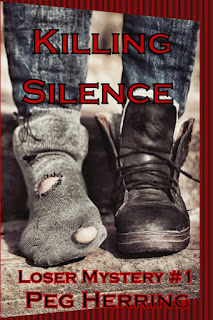 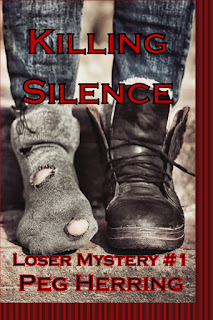